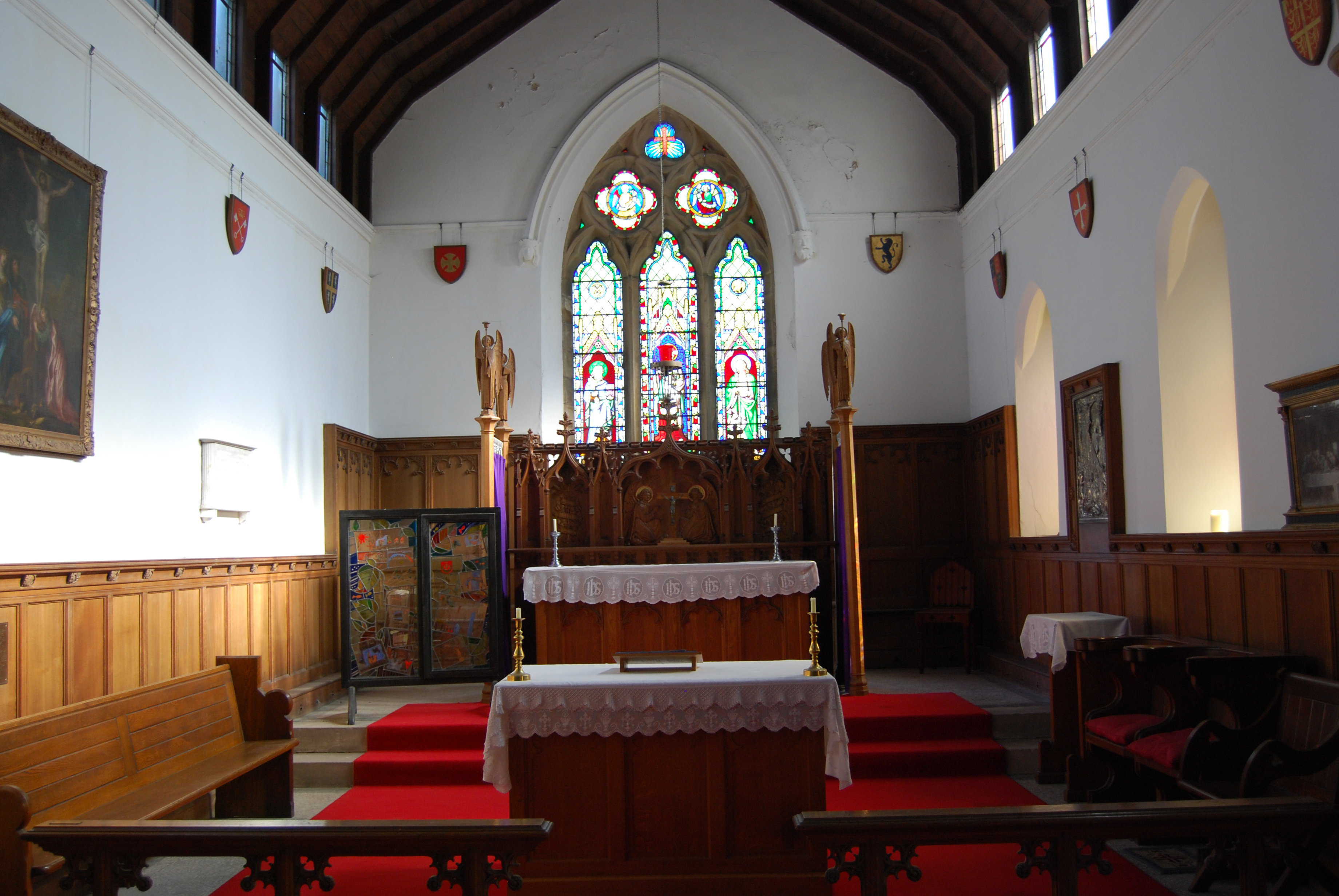 
Seven shields are displayed around the Sanctuary which depict the temporal and ecclesiastical history of the church. 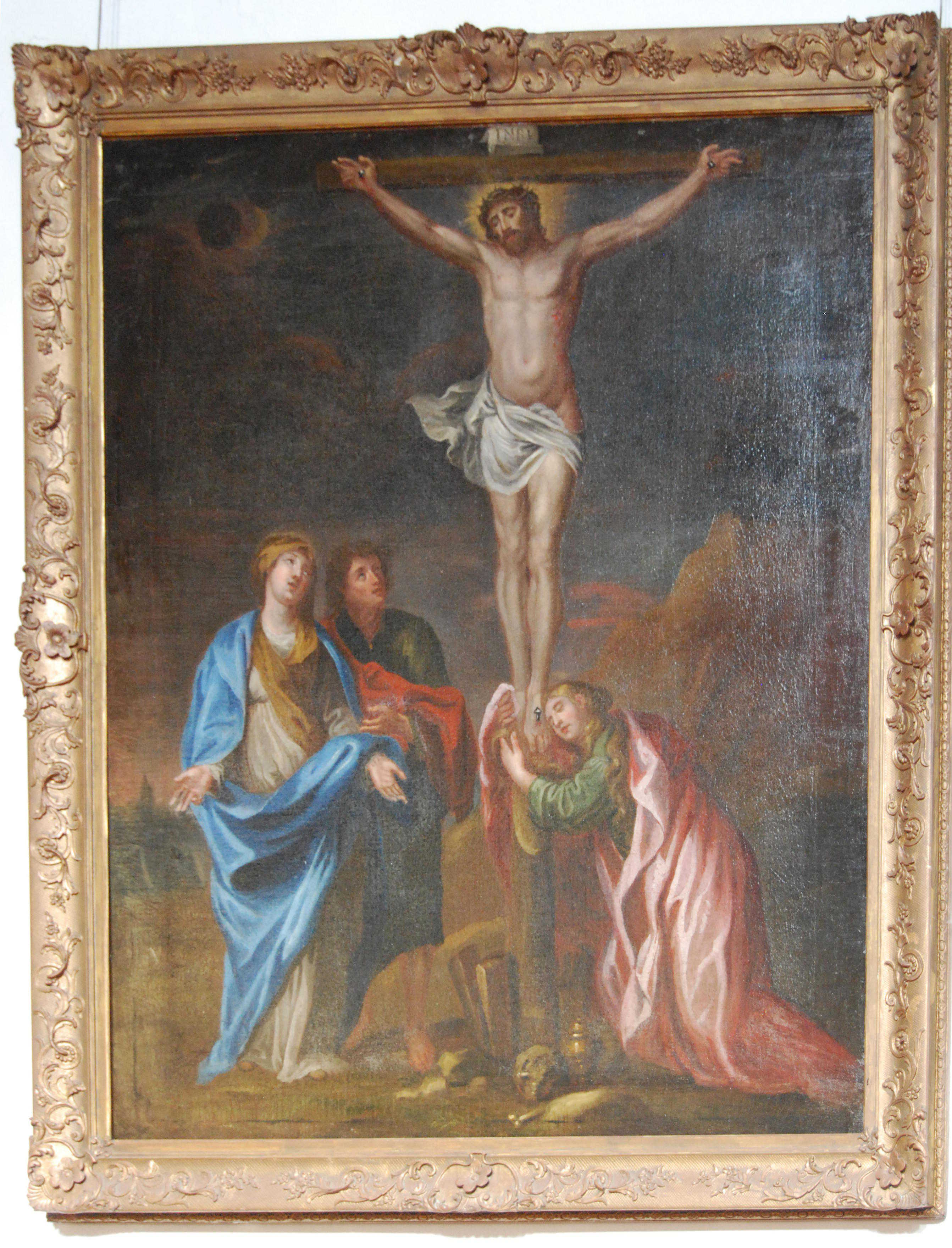 Hanging on the north wall is a painting of the crucifixion after the style of Murillo. It is believed to have been originally hung in the chapel of Kirkley Hall, and arrived in Chatton in about 1938. The painting was restored in 1990. 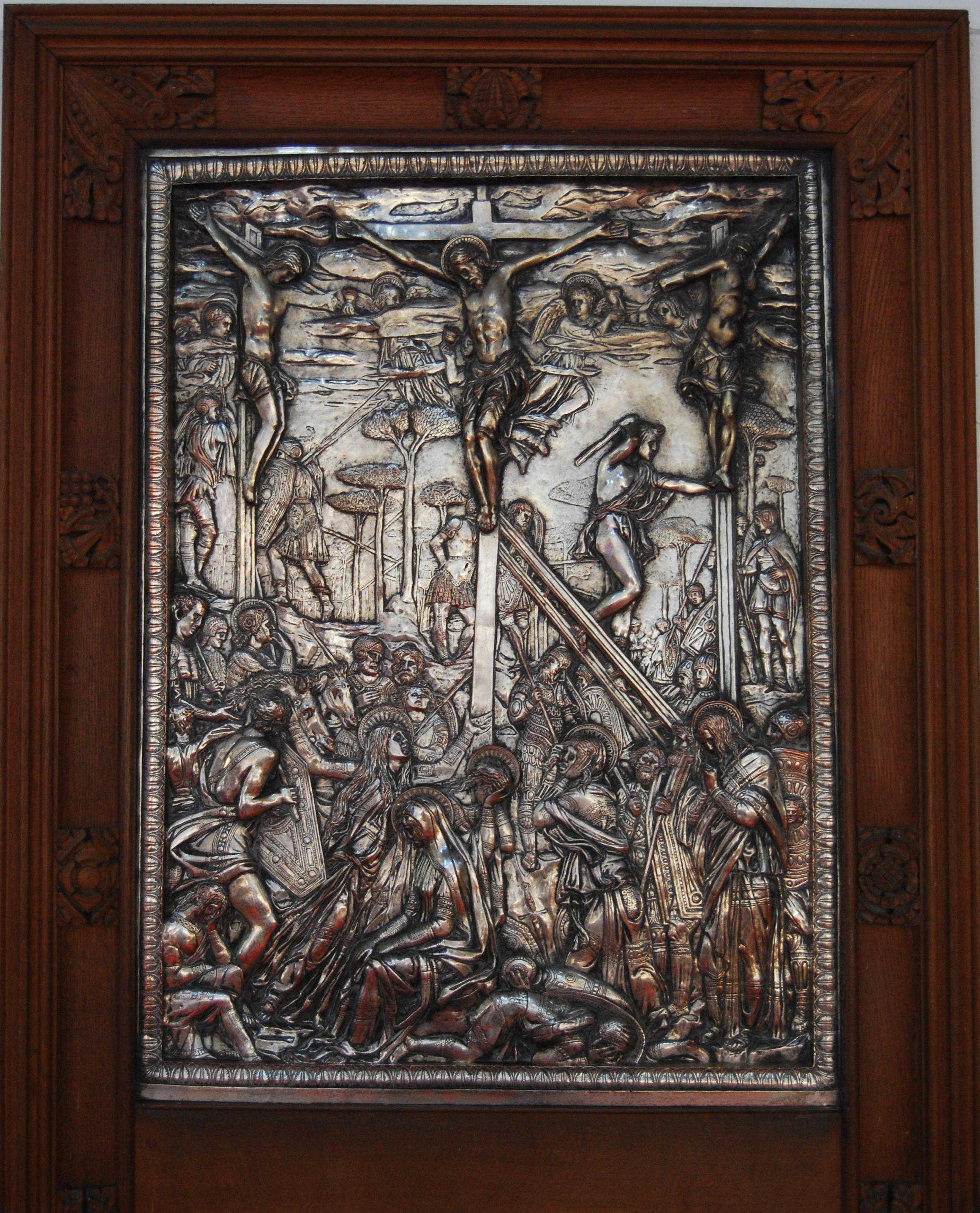 On the south wall there is a relief of the crucifixion, of uncertain metal composition. It is believed that this was purchased in the shop in Florence by Mrs Culley of Fowberry, together with a copy of the Last Supper. 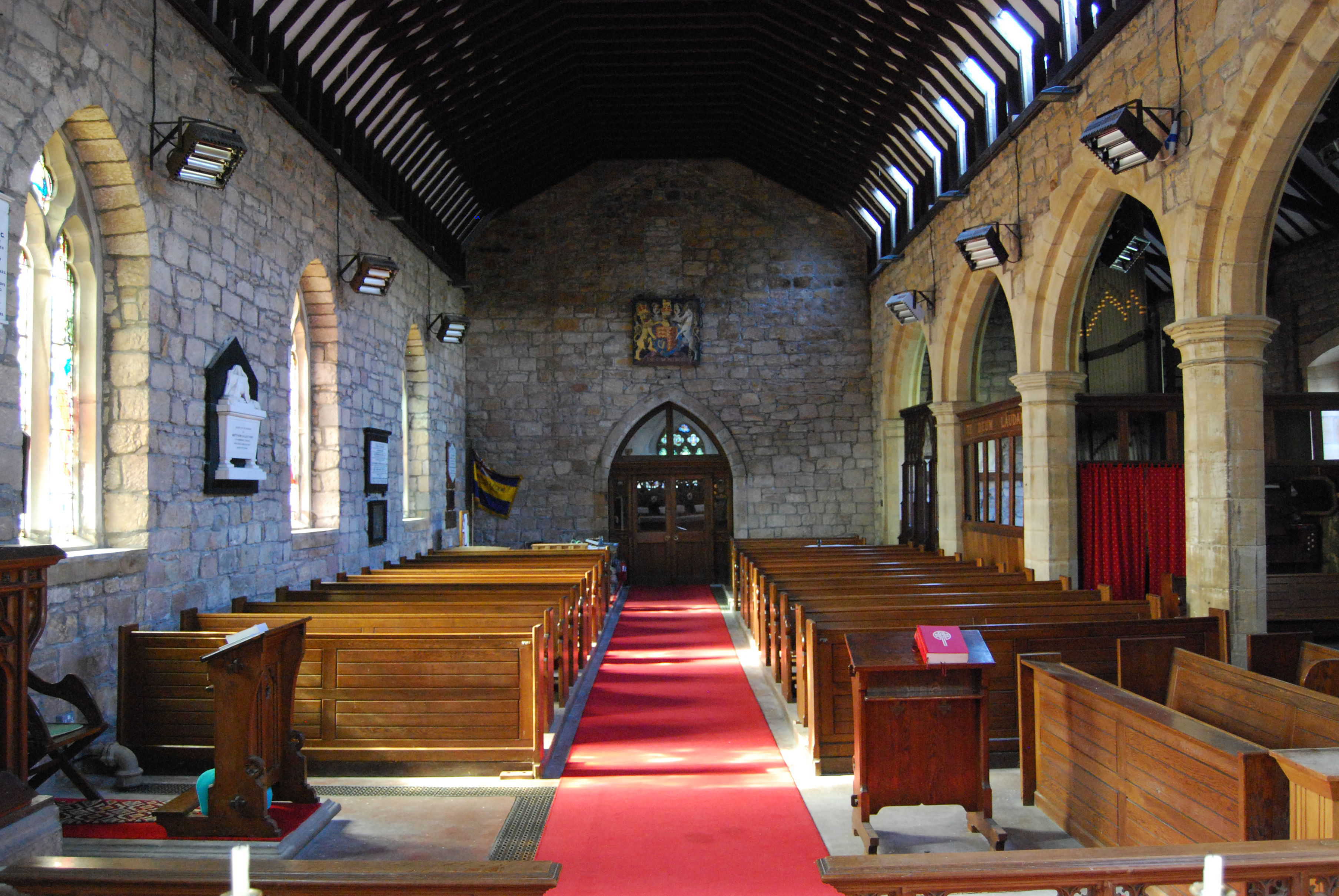 Of eighteenth century walling with one "early English" lancet window and two "perpendicular" two - light windows inserted in the nineteenth century in its south wall. At one time the nave would have been plastered, but this has all been removed and the rubble walling pointed. At the back of the nave is a Cromwellian oak table and coat of arms of George VI. These were given to the church by Mr A. W. Milburn of Fowberry Tower to mark the Queen's coronation. The plate on the oak table is engraved; 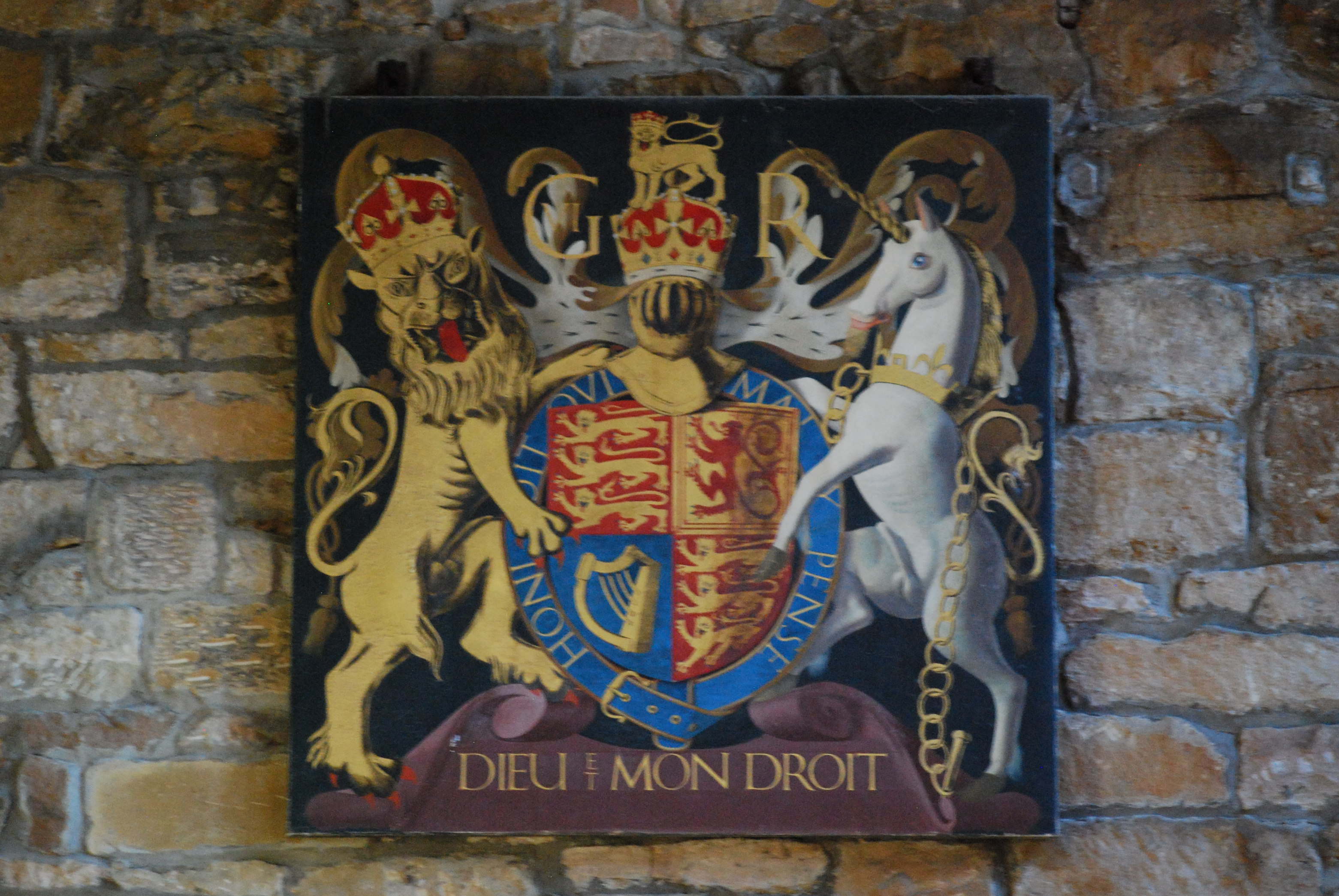 The coat of arms is made from Fowberry oak and was painted by a tutor in the Fine Art Department of Newcastle University.

Of four-centred modern "perpendicular" arches of octagonal pillars with moulded capitals and bases.

Entirely modern and "perpendicular" in style was added to the church by the Duke of Northumberland. The west bay of the aisle is screened off as a baptistery,

and the centre of the aisle is occupied by a tracker organ which was originally in Magdelen College Oxford. This leaves the east end which has been turned into a lady chapel and the old high alter has been placed here when a new one was purchased. The reredos (screen behind the alter) depicts the Patron Saints of the British Isles. 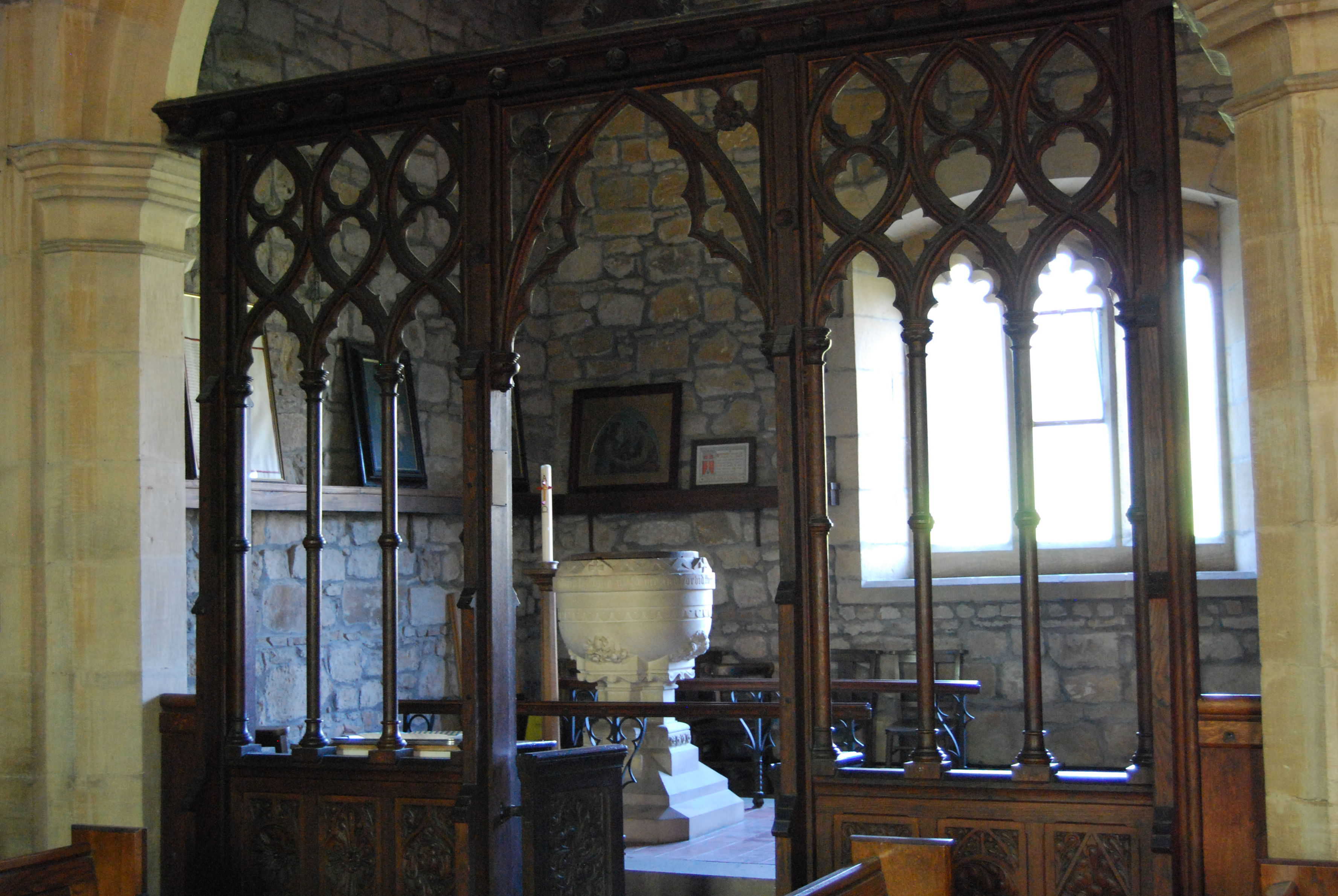 Contains the fount presented in 1855 by the vicar and his wife in memory of their deceased children. The banner depicts the good shepherd. The original woodwork from the baptistry was removed earlier in the century and made by the Wilson's of Chatton into the reredos riddle posts which now surrounded the high alter.